I always thought I understood the meaning of the phrase “An emotional rollercoaster” but found the true definition when we were looking for the elusive Snow Leopard in the Altai Mountains of western Mongolia.

We started planning our expedition with great excitement about a year before the Covid pandemic; just for the trip to be postponed for two years. Earlier this year we had everything planned and the excitement started building up again just for the Ukraine situation to put a halt on proceedings and even a month before our planned departure date we were not a 100% sure the trip would go ahead. Finally, it was confirmed and with a great sense of relief and expectation, we made our way to Mongolia and headed to the Altai Mountains thinking that we can now relax and just enjoy the experience. Little did I know that the true emotional rollercoaster ride was only about to begin!!

We arrived at our rustic but comfortable Ger camp with a beautiful view of the Mongolian Steppe and the Altai Mountains. Everyone was chatting about seeing the Leopard and that tomorrow might be the day. Everyone was up early and ready to go up the mountain and start the adventure. The journey up to the high mountain valleys is an adventure in itself and once the vehicle somehow managed to get us over the final very steep slope to the high plateau we got out and stood in awe of the incredible beauty around us. The silence is amazing and with no signs of human presence you truly feel small and there were several times during the week when I looked around and saw everyone standing alone deep in their own thoughts. It was during these sessions that I was again reminded about what is truly important in life. This is what travelling is all about.

We got to the top of the mountain looking down into the valley which is a known territory of female Snow Leopard and our main hope of seeing one. For the first few hours, everyone was frantically scanning with the feeling that we are about to see one. After several hours the excitement levels were down a notch and everyone took a seat on a rocky outcrop and continued to scan hoping for any sign of a leopard. It was very windy and cold and by lunchtime, your eyes were burning you could feel the effects of the wind and cold on your face. A warm lunch during which the chatting was still about the leopard, but that might not be that easy, got the energy levels up again and we were back to scanning. There is a massive amount of Snow Leopard habitat in these mountains and they could be anywhere. As your mind starts drifting someone spots a Siberian Ibex and later an Argali Sheep, both key prey species of Snow Leopard, and the sense of anticipation increases as you follow them into a rocky area and perfect ambush spot for a potential leopard kill; just to see them walk out the other side and over the mountain unscathed. Back to scanning or taking a break from the cold. At the end of the day, we made our way down the mountain and everyone was reminded that leopards visit a part of their territory roughly every 5-7 days so we have time, and tomorrow might be the day. 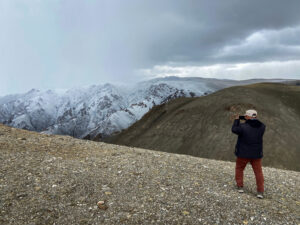 Days two to five were exactly the same. Huge excitement as we get into the vehicles with a “today is the day” and heading up the mountain for each day to follow the same path. After scanning during the first few hours of the day the spotters would move to different valleys scanning “known” resting places only to return with “unfortunately nothing there today”. There were quite a few moments of excitement when one of the spotters would excitedly call another one over to have a look through the scope at a potential leopard way in the distance only for it to be a lighter coloured rock. Everyone was on full alert when the Mongolian Marmots started with their alarm calls;  often a sign that they have seen a leopard on the move only to be interrupted by an unexpected snowstorm and sending everyone to take cover in the vehicles. As soon as the weather allowed, we were back out scanning disappointed that we might have missed the cat but mesmerised by how quickly the landscape changed with everything covered in snow. I will never forget the incredible scene and beauty after that snowstorm. Everyone was excited and on full alert when we were reminded that the leopards often sun themselves after such a storm and a bit disappointed to go home empty-handed that evening after what felt like we were very close to seeing one.

Slowly but surely doubt started setting in and you start wondering if we might miss it. Snow Leopards are after all incredibly elusive and very few people get to see them in the wild. We started staying out later and making our way back in the dark (sunset in spring is only after 9 and it is already light around 4 in the morning) and getting up earlier. We just have to give this our maximum effort.
The final day was an incredibly emotional day. You wake up knowing that today is the last day so it is with huge excitement and hope as well as apprehension that you make your way up the mountain for the last time. “Today is the day” with everyone trying to sound convincing. You feel that the ground team was more hurried in packing the equipment and food so maybe they got news that one of the spotters found one. Just maybe today will really be the day. After our 90 min journey up the mountain, making sure that we enjoy and don’t miss some of these beautiful spots for a final time, we get to the top and everyone is just scanning. No sighting yet. Disappointment but still hopeful. Soon we are in place and scanning, hoping and still believing and giving this our best effort. I kept thinking that please all we need is just to catch that one glimpse of movement giving its position away but remind myself that I have always believed that a leopard finds you and you don’t find a leopard. Just keep scanning! Everyone was quiet, just alone with their own thoughts. In your mind, you start preparing yourself that there is no shame in not seeing them and you convince yourself that it will be disappointing but it will be okay in the end. You think about the privilege of spending a week in this remote and beautiful part of the planet where these majestic creatures still roam freely. That in itself is more than enough reason to spend a week here. But two minutes later you are back to hoping and believing that it will happen. We will see a Leopard!!

Lunchtime arrived and it was a quick and quiet lunch. We make our way to the opposite side of the valley to be able to scan the shady spots which are more likely for a leopard to be with it being a warm day. I again follow a small group of Ibex hoping they will spot the Leopard and giving its position away but again they just disappear over the hill. You scan the same area you have scanned hundreds of times during the week with the hope that just maybe the leopard might be lying in that spot. Then with less than 3 hours of daylight left one of the spotters close to me calls me over with too much excitement and asks me to look in the scope. I remember walking up to him thinking that at least he found a Rock Ptarmigan (special bird that we were still looking for). As I get to him I see his eyes smiling and my heart starts beating faster. I look in the scope and see nothing! I scan harder and all of the sudden there is a flick of a tail. Then the turn of a head and you suddenly realise that you are looking at a Snow Leopard. That incredible camouflage!! And then it gets up and walks into the sunlight, stops and looks directly at you for a second. But that second is enough. That second will stay with you forever. You will never forget that moment. It makes everything worthwhile and the reason we do these expeditions is to try and get a glimpse of these elusive creatures. I remember looking at the local guide trying to thank him but we are both unable to speak and just look at each other both having to wipe away tears of joy. Having dreamed for a lifetime and planning for years and seeing a Snow Leopard after such an incredible but emotional week is a feeling difficult to describe but it makes these trips worthwhile.

We’ve added a clip to give you an idea of this absolutely amazing adventure.  For more info, talk to our team at info@naturetravelexpeditions.com